About Us | Caledonia Works

Caledonia Works is a small 4 member collaboration of rail enthusiast & historians named Kris, Cameron, Daniel & Gwion, who together create highly detailed steam locomotives for Train Simulator 2021. Since it’s founding in 2017, Caledonia Works has grown exponentially each year & has an ever growing library of locomotives and rolling stock from the 1870s to 1920s. 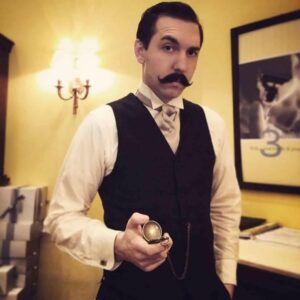 Born and raised in the suburbs of St. Louis, MO, Kris’ love of trains comes from his family history of working for the Caledonian Railway, love of history & painting steam locomotives. Kris is the main head of Caledonia Works, with professional experience in modeling & texturing. Kris handles all of CW’s modeling, animations, texturing, promotions, website, sales and tech support and the main researcher for reference material. 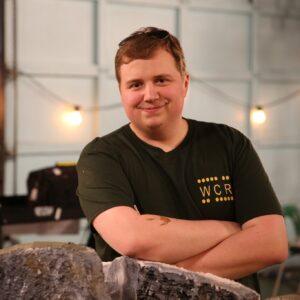 Gwion, based in South-West Wales, is in charge of scripting and R&D for Caledonia Works. Without his knowledge & expertise, CW would have never gotten off the ground, owing to his BSc Degree in Computer Science & years of experience in software engineering. Gwion’s love of trains has come from his love for model railways.  He is also known for his part in the “Great Model Railway Challenge” as team captain of “Who’s Counting Rivets?”.

Cameron currently resides in Alberta, Canada. His love of trains comes from a family history of working on railways in Britain & a love of history. He is Caledonia Works second 3D artist & often kindly lends a hand in modeling & his knowledge to make models as accurate as possible & is one of the main researchers for reference material. He is also the head of “Darlington Works” for Trainz Simulator.

Daniel currently resides in North Yorkshire, UK. His love of trains comes from a love of history of railways & especially his love of the NER. He is in charge of customer support, beta-testing and one of the main researchers for reference material.

Joe currently resides in Leicester, UK. He has a great interest & knowledge for rolling stock from steam era, the Southern region in particular. He delights in making wagon packs for CW.

Dante currently resides in West Baldwin, Maine. Dante is one of our locomotive modelers in training & shows great promise of a future career in TS. He has a great interest in narrow gauge & lesser known locomotives of the industrial kind. He is also a volunteer on the Wiscasset, Waterville and Farmington Railway.

“To glorify God by being a faithful steward of all that is entrusted to us and to have a positive influence on all who come into contact with Caledonia Works.”

Caledonia Works is also a Christian company which is used to support charity & some profit from the website to help feed the homeless, unemployed, sex-trafficking victims. It is also used to bring joy & happiness to people who need it most during these hard times & to help spread the gospel. We have THE BEST “job” ever. Blessed is an understatement. We are devoted to capturing the history & majesty of the Golden age of Britain’s Railways & doing it to the glory of God.